No really, this is a big deal. I’m SUPER busy, and all my kids are picky all in different ways, so let’s just say we eat a lot of things that can be heated in the oven on trays. Or in the microwave. And take out pizza. Waaaaaaay too much pizza.

But a while ago I made some teriyaki chicken, because I was sooooo damn sick of chicken strips and when you try to make THOSE from scratch for more than a few people it’s a labor intensive nightmare where you end up with these mittens of breadcrumb and flour and egg all over your hands. And everyone ate the teriyaki chicken. Even The Kitten.

THAT’S a super big deal too, because The Kitten is a very nuggets and fries, macaroni and cheese, cheese pizza kind of girl. But she’s trying to broaden her palate, and at least tries whatever I make, and she liked teriyaki chicken.

More to the point, she actually requested it today because she was CRAVING IT. Oh yeah. Mom win. So I made it, and everyone ate it AGAIN*, and so I share the recipe here, in triumph:

Get some chicken. I used chicken tenderloins but you could probably use boneless thighs and I’m gonna try that next time because those are cheaper and I’m feeding FIVE MILLION PEOPLE. How much chicken? I don’t know. How many people are gonna eat it? Do you like leftovers? Figure it out. Then put the chicken in a baking dish and pour some tequila over it.

Also some teriyaki sauce. I used Island Soyaki from Trader Joe’s but whatever.

Now let it marinate for …… ooh, I don’t know. How long do you have? Anywhere between half an hour and overnight. Marinating gives the flavor a chance to permeate the meat and also gives you a chance to drink wine on the deck because you don’t feel like cooking just yet.

Anyway, when you feel like the chicken is flavorful enough (or you’re hungry), go heat a frypan over medium-high heat, and throw some butter in there.

Yes, butter. That vegetable oil crap is for pussies and vegans. How much butter? I don’t know …. how much of a culinary rebel are you?

Now put the chicken in. Let it sizzle good. Inhale the aroma. Hover nearby with your second glass of wine to make sure it doesn’t burn. Maybe put on some music. Pink Floyd or something. Anytime the pan sauces seem to be drying out, add some more butter and teriyaki sauce. Oh, and pineapple juice. Slosh some pineapple juice in there.

Flip it when you think it’s ready. Take it out when it looks like this: 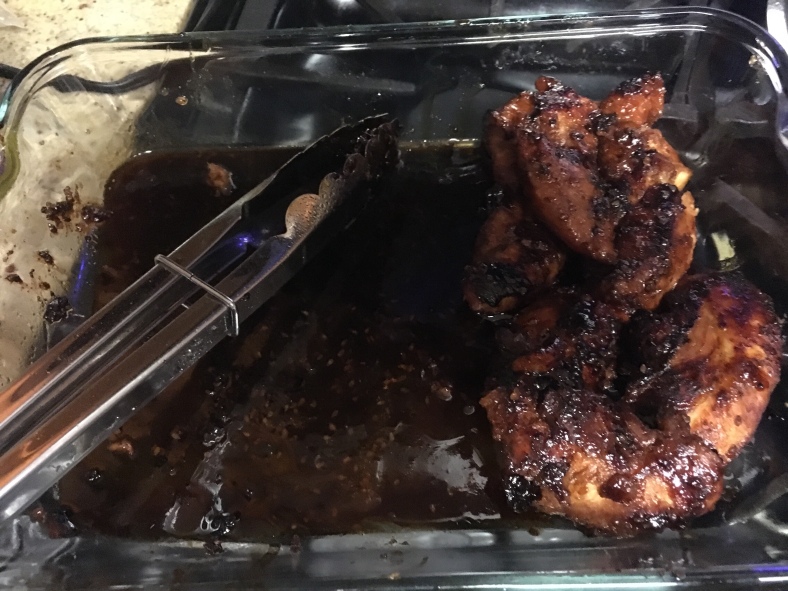 Yeah….. I didn’t get to it before the locusts did. That dish was FULL.

Oh, and if you need to cook a second pan full (because FIVE MILLION PEOPLE), be sure and scrape out the burnt leavings first……. then start over from the butter step.

Serve with sticky rice, which I make in my Instant Pot. I got an Instant Pot a while ago because it seemed like a really good tool for easy cooking, but 99.9% of the time I just use it for cooking rice. Some of the kids don’t like basmati, so I was making jasmine rice*** and trying to make it not sticky with Epic Rinsing and various other strategies ….. but no matter what I did, it always turned out sticky. Then I discovered the kids liked it sticky, so I call serendipity**** and now I just throw in the rice, water, put on the lid and press the rice button, and everyone is happy. Especially me.

And, you know, serve vegetables. Because Vegetables Are Good.

(Oh HELL yes the pineapple juice you threw in the sauce counts! I won’t tell if you don’t.)

Oh, and I like to throw a little cilantro on top, because it’s Fusion Cuisine. Ok, actually just because I love cilantro with an almost indecent passion, but garnishing fusion cuisine sounds better.

That’s it. Easy and delicious. Yes, it IS one of those recipes that’s more art than science, but really, isn’t all of life? …………SIP.

(In the interests of full disclosure I should tell you that this recipe was brought to you by two glasses of Troublemaker sauvignon blanc, from Trader Joe’s. Yes again with the Trader Joe’s and no, I don’t just shop there for the cheap booze.)

*Ok, The Drama said it was a little too browned for his taste, and I pointed out that he was big enough and competent enough and the recipe was easy enough that HE COULD MAKE IT NEXT TIME IF HE WANTED, and then he shut up and ate it.

** No I DON’T put alcohol in everything. Pffff. I don’t put in the bath. Far too drying for the skin.

*** Wow look at me knowing different kinds of rice and stuff. Maybe I AM a real little Susie Homemaker……… sip.

****Like calling shenanigans, but nicer all round for everyone.

One thought on “Because Wine Pairs Well With Food”