My friend The Chemist called the other day, for a “sanity check”.

She’d gotten got a call from a guy with a wife and three kids who wanted to rent the one bed, one bath in-law unit attached to her house. Now, obviously a place that size isn’t really suitable for a family of five, at least not in our western middle class neighborhood. I realize in many parts of the world it would comfortably fit three generations and a small herd of goats, but we’re not IN those parts of the world, although sometimes it feels like it around here when all eight kids are home, including The Hair back from college and sleeping on the couch because there’s literally nowhere else.*

Anyway, this guy said he didn’t actually want to live there, he wanted to pay her in cash and not live there but use the address to get his son into a better school district. Now The Chemist is a compassionate woman but also old and cynical so after about five seconds of the “mom” response of completely understanding she hit the “not a complete looney” response of aw hell nooooooo because she started thinking of the several dozen nefarious things this stranger on the phone might actually be planning to do, with an address where he didn’t actually live.

So she said no and then called me to Assess the Reasonableness of Her Answer (as they say in the Common Core math curriculum), and I most definitely concurred. However, the MOST disturbing thing about all this is that she’s calling ME for a sanity check. ME. My sanity is like patio furniture that’s been left out in the elements for a few too many seasons. It’s still there, it’s still functional, but it’s definitely a little beat up and on the wonky side…..

But I digress. Again.

Anyway, Mr Probably A Drug Dealer Or Something apparently also had a heavy foreign accent, which shouldn’t make the whole thing even creepier but somehow kind of does. We discussed whether this made us racists or not, and decided that no, it did make a creepy situation even creepier (as would a number of other random factors**), but in any normal situation would make no difference, which makes us not racist but creepist, which is totally a word now. We’re creepist. Prejudiced against creeps of any nationality, socio-economic background, or sexual orientation. If that makes us bad people, so be it. We’re old and don’t care.

Actually I generally have enormous respect for people with accents, it means they can speak another language which is more than I can do, despite several attempts including a go at Spanish on Duolingo. Unfortunately that cute little owl and his passive aggressive reminders were no match for my busy life, plus I’d pretty much become immune to passive aggression after decades with The Ex.

For example; you know that perennial pile of laundry on the couch that everybody*** has? I was scrolling through old photos recently and came across a picture I took, years ago, of a note The Ex left on that pile of laundry: 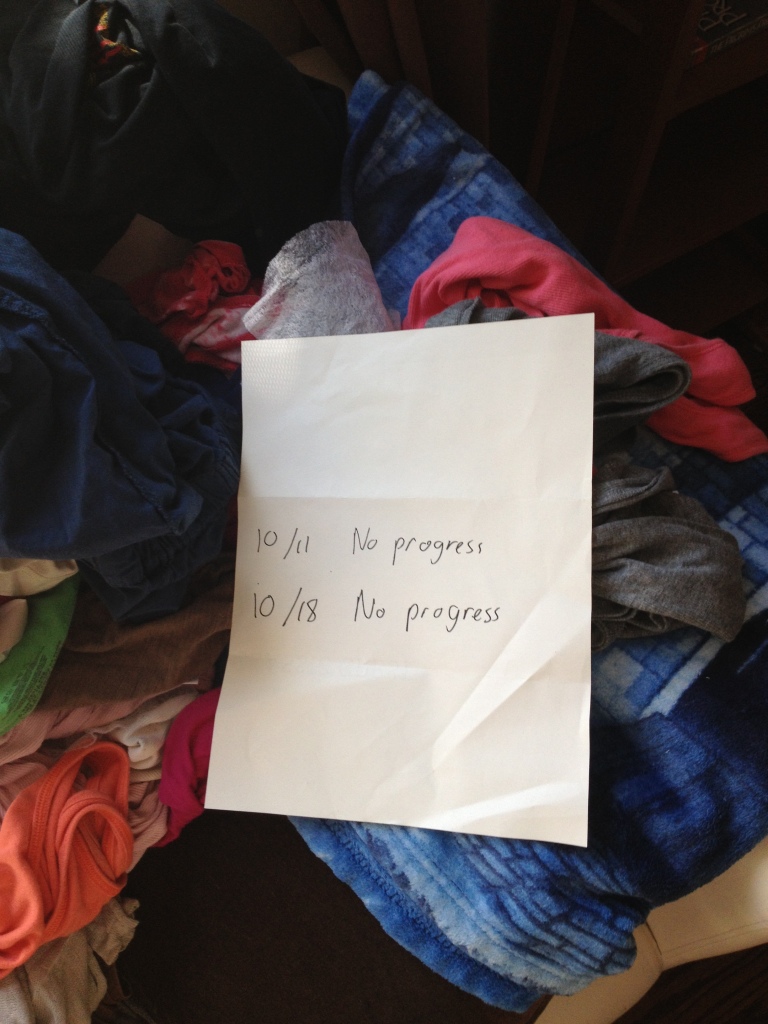 Yes……. at that point in my life I was homeschooling four children, aged 7-18, plus a whole heck of a lot of other stuff but OMG I LEFT SOME LAUNDRY ON THE COUCH FOR MORE THAN A WEEK!!!!!!

You know, I feel like I could have avoided the hassle of a divorce and saved a LOT of money in legal costs if I’d just published this picture on the Internet with his full name and address. An angry lynch mob of caffeinated mommies in sweatpants with messy buns would have taken care of the rest.

But fortunately it was October, and Murray was riding a bike on the porch for Halloween, so I knew exactly what to do with that judgey little note:

I recall The Ex being unamused. Honestly, it’s a miracle we stayed married another three years. But I digress yet again.

Anyway, The Chemist happened to make her sanity check call to me while I was at the beach with The Kitten, Kicker, and Cherry. Kitten is a sensible teen now and Cherry just started rolling over so mostly lay like a blob on a towel in the shade tent, but The Kicker is two. And entirely embracing her twoness, as well as the beach. Especially the sand.

She lay in the sand, she rolled in the sand, she found things in the sand to put in her mouth and ran away giggling when I tried to take them out. She rubbed her face in the sand. And then she went and played in the water to really make sure she had become as one with the beach as was humanly possible before I put her back in the car. Obviously a comprehensive bath was in order when we got home, and that washed the beach off, but you know what it didn’t wash off?

The Kicker has a “Frozen” princess nightgown, featuring Elsa on the front and sleeves and overskirt of a dainty, glittery netting. The little flecks of silver glitter from that nightgown are constantly getting stuck to The Kicker and The Cherry, who is frequently and enthusiastically hugged by The Kicker while wearing her nightie. And not coming off in the bath, and there’s only so hard you want to scrub that soft baby skin, so I guess I just have glitter babies now. The Canadian noticed and asked why his babies were sparkly, and I explained the nightgown but then of course kicked myself for not instead hissing dramatically, “because they’re vampires”.

Actually, scratch that. I really never did get the whole “Twilight” craze. If I wanted to watch a centuries-old vampire have a creepy**** crush on a high school girl, I’d just rewatch the “Buffy” tv series. Buffy vampires are old school and have the decency to crumble to dust in sunlight, as nature intended. You know, those Twilight guys probably aren’t vampires at all, they just don’t want to admit they wear Disney princess nighties.

Wait…… what was I talking about? Oh right, how The Chemist called me to check if she was sane. You’re good, Girl. Leonard’s not sure about ME, but you’re all good.

*I love you, The Hair, never leave!

**These factors include but are not limited to: sweatiness, personal hygiene, stupid haircuts, lack of blinking, excess of lip-licking, and calling you by patronizing names.

***Everybody except people with full time maids, and sociopaths.

****Secret Vampire Lair is definitely another possibility on the list of what Mr Sinister Accent might have actually been planning.

One thought on “Because My Brain is like a Cat with a Laser Pointer.”