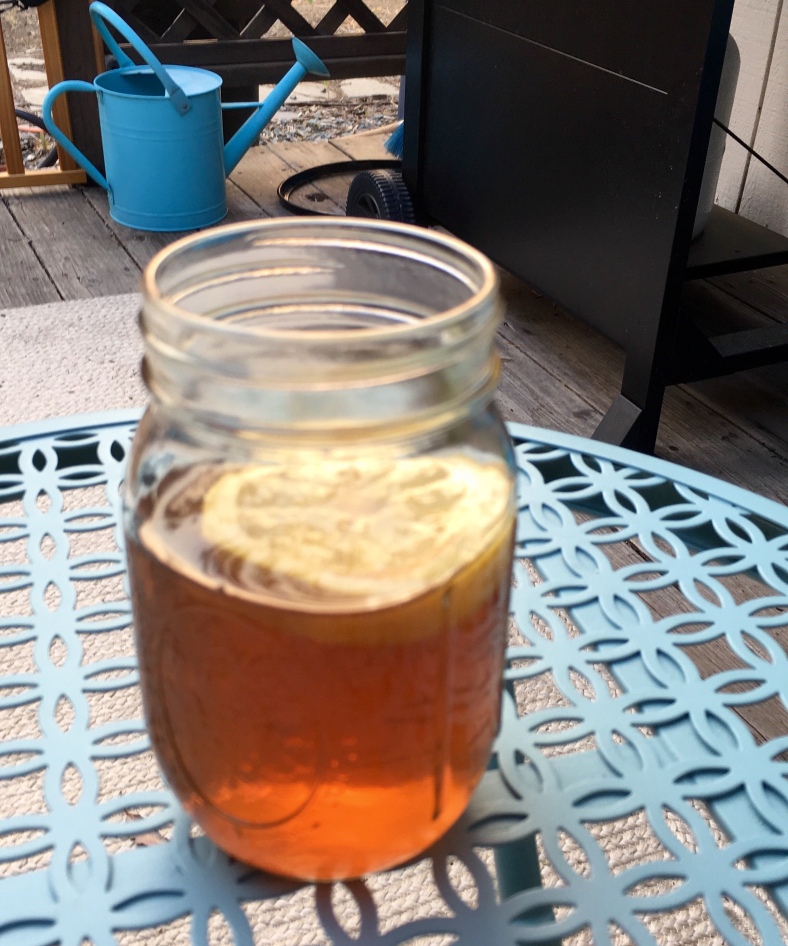 I hurt my back pretty damn bad about ten months back. This is not the good news. There’s a story to the injury, of course, and I’m not going to go into it at this time, but it does involve a boat. Approximately 30% of all cool stories start with a boat, and about 85% start with alcohol*. Yes, there is overlap**, although ironically my boat story does NOT involve alcohol. Yes, the story I’m not bothering to tell you right now. MOVING ON…..

Anyway, I was in excruciating pain for the first few months, even on maxed out painkillers, and then in bad and constant enough pain after that to still take pain killers every day. No, still not the good news.

The good news is, I found a way to reduce my pain so dramatically that I’ve taken less drugs in the last few weeks than I was taking before on a daily basis. The bad news? I had to give up sugar to do it.

Which, long story short, is why I was sitting outside in an Adirondack chair recently, in 95 degree heat, with a glass of iced tea. Unsweetened green/white iced tea is my soda substitute, and no I can’t do diet soda because I found out the hard way that apparently, fake sugar is as much a pain inducing inflammatory as real sugar. I refuse to give up alcohol (or bacon), however, so I was also wondering what I could put in my iced tea to make it more relaxing. I decided against bacon.***

Now somehow I’ve gotten to the age of 45 without ever having had a Long Island Iced Tea, but I’d heard of it, and I assumed that iced tea would be a key ingredient. It’s not, I looked it up. There’s NO tea in it. It’s got FIVE different kinds of alcohol, and cola. It’s not the elegant sounding beverage it tries to pass itself of as at ALL; it’s basically rum and coke with extra steps. And not gonna work for me because 1, cola and 2, way too freaking complicated.

So I just went ahead and invented the Caribbean Iced Tea instead, and this is how you make it;

Get a container. I used a mason jar but any glass will do. Or a mug. Whatever.

Put Iced Tea in it. Any tea. I like a green white combo but you could do black or herbal or any other kind. You do you, girl.

Now put some rum in it. How much rum? I don’t know…..how stressful was your day? I did about 2 shots of rum to 8oz of tea. If you don’t have any rum, you should first stand at your bar (or pantry, whatever) in a bewildered fashion, and say “Why is all the rum gone?” Then put something else in it. Like whiskey. Or gin. Or cooking sherry. Whatever you have.

Add a slice of lemon, to prevent scurvy. This step is optional. I usually have fresh lemons on hand because I like to squeeze lemon juice on everything. Fish, chicken, veggies, rice, recalcitrant children. But if you don’t have any just leave it out. Or put in a maraschino cherry. Or some peach or something. Just you know, not CELERY.

That’s it. Easy peasy, sit and sip. Refreshing AND relaxing****

It occurred to me, halfway through my second Caribbean Iced Tea, that busy overworked mommies probably need a lot more super simple cocktail recipes. Things you can remember how to make even when you can’t remember where you left any of your six pairs of sunglasses. Fortunately my friends are HUGE enablers and have so far helped me come up with two new 2-ingredient cocktails:

–The Break-up Bomb. The Chemist and I invented this one when she brought a mutual friend over to drink and bitch about men, right after she (the friend) broke up with a loser who was lying to her about not only his actual name, but also his marital record. I had some berry flavored sparkling wine which seemed appropriately girly, but not nearly alcoholic enough for our friend’s needs. So we pulled some blackberry moonshine out of the bar and tossed a shot into the glass of bubbly. It’s like a sake bomb, but a lot pinker, and more alcoholic.*****

Omg, my friends and I all sound like total lushes. We’re not, I swear. Although if you’re reading this blog at ALL you’re probably not the kind of person who would care.

I know, I know, I’m a mixology genius. And I would absolutely write a book if I could manage to get a blog post out more than about once a month……

** A classic overlap story example: The Canadian went to a bachelor party weekend for one of his friends last year. It was on a houseboat. There was alcohol in abundance. At one point a boat full of bachelorettes started heading toward them, calling put playfully, “We come in peace!” The Canadian’s drunk buddy misheard them and yelled back, “Yeah, you can come pee over here!” Whereupon the girls’ smiles faltered, faded, and they turned their boat around.

****and by “relaxing” I mean “deceptively alcoholic”.

*****our friend said she should be called “The Idiot”, but The Chemist and I disagreed and pointed out she is NOT an idiot, she has just been making some Questionable Choices With Men in the wake of her lengthy and abusive marriage ending. So she deserves to be cut quite a bit of slack. Therefore, we shall call her “Moonshine” instead.