So I blogged nostalgic for Steven and Murray, and the next day I go to put my trash out and here’s THIS outside my door. Her name is Brooklyn, she’s fabulous, and she knows it. She came with a note of introduction, but I have no idea which of my amazing friends left her on my doorstep like an orphaned baby in a basket…. or orphaned torso with attitude in a coconut bra, as the case may be. The Sicilian and The Chemist are prime suspects, obviously.

Omg I’m in love. She doesn’t have any hair or, you know, LEGS. She’s also missing a finger, and has obviously generally knocked about a bit and seen the world. But she is rocking that coconut shell bra and has epic, EPIC Resting Bitch Face.

I think the RBF is my favorite. It says that maybe she is all beat to hell and hasn’t had all her parts since 1986, but she is still low-key cooler than you will ever be. So far The Drama is the only one who seems to have a problem with Brooklyn, and I’m pretty sure it’s because he knows there’s only room for ONE Queen Bitch around here, and he’s gonna have to fight to keep his title with Brooklyn as a contender.

I wanna get her a disco ball and a dirty martini and play some Gloria Gaynor. Is that so wrong?

So anyway my friend Khaleesi* came over, and we were trying to figure out Brooklyn’s arms. I figured they would swivel all the way around, because her HANDS do (aqua blue nail polish, btw). But they really didn’t move at all, so we figured she was just stuck in that one pose forever, until we moved her from the outside bench to the art studio in the yard and one of her arms came off.

So we panicked briefly but only briefly because we didn’t wanna lose our shit in front of Brooklyn, because she’s just soooo cool and totally not fazed by her arm coming off, but then we realized it would just pop back on. Whew.

And then it occurred to us that we might be able to pop it back on at a different angle, so we popped it off again and sure enough, we could put it back on positioned up instead of down. THEN, Khaleesi commented that her arms looked weird, and they did, and she realized that her thumbs were the wrong way around. So then we popped off BOTH her arms and switched them around, and that was much better:

Bonus: we are now all prepared if Brooklyn wants to be Venus de Milo for Halloween, which I think is a definite possibility, because she’s classy like that.

It occurred to me hours later that maybe we could have just switched her hands instead of her whole arms, but I’m a little nervous about that because her hands fit a lot more loosely than her arms and I’m worried I might get one off but not be able to get it back on. Of course if I CAN’T get her hand back on, I could just get her a hook and she’ll be ready to hang with Captain Cup-hook, our mini one-armed pirate skeleton, who guards the front door from atop a bottle of grog. He started out as a REGULAR mini skeleton, The Canadian bought him to go on the tow bar of his truck for Halloween – as you do – but then there was a misadventure involving my younger step-son (The Monkey) and a car door and …well….

So I made him a new arm out of wire and screws and a kitchen cup hook at the end, because OBVIOUSLY that’s what you do. You lose an arm or leg or eye, you just get a hook or peg or patch and presto, you’re a pirate. 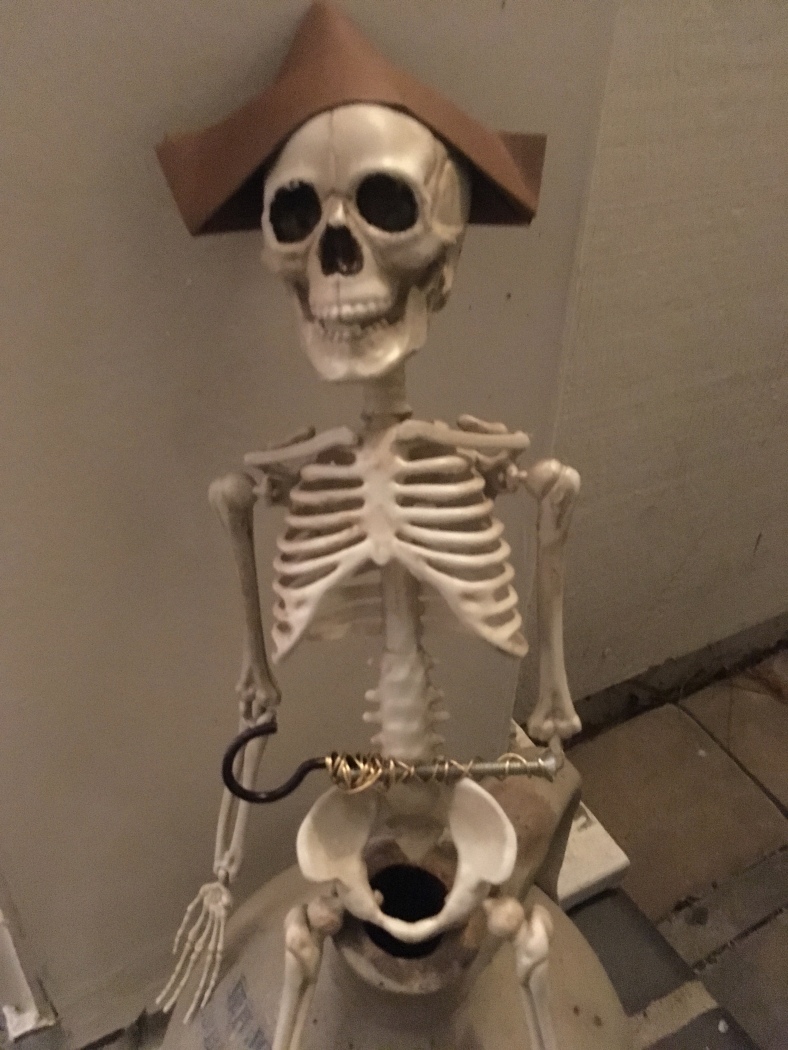 So I guess next time Khaleesi comes over we should have a couple of rum based beverages and detach Brooklyn’s hands and arms and see what configuration looks best. Then we’re gonna get her a tube top and a filmy blouse and some bangles.

Anyway, I pointed out to Khaleesi that I guessed she’d be in the blog post about this, so we’d better come up with a pseudonym for her because that’s how things roll in Leonard’s World**. After she was done squealing and jumping up and down and clapping her hands she suggested something either related to music (which is what she does) or Daenerys Targaryen (who I guess she identifies with because I don’t know…..she’s blonde and has a thing for Jason Momoa? Of course, who DOESN’T have a thing for Jason Momoa???***)

“I’ll call you Khaleesi if you want” I offered. (More jumping and squealing)

“How about MY Khaleesi?” She suggests.

Yeah….no. That’s in the same camp as “Captain” Deadpool, as just too much and not gonna happen.

Khaleesi it is. Welcome to getting written about on my wacky little blog.

*second time on the blog, you get a name. That’s how it works. Although it occurs to me there have been exceptions…. ok, let’s just say the rules are random and arbitrary and that’s how it’s gonna be. My blog, my rules……or lack thereof.

**not to be confused with Elmo’s World, on Sesame Street, which The Kicker watches and which is frankly an even weirder place.

***well, ME, I guess, because The Canadian is all the hunky scrummy manhood I can handle, and The Drama, who swears he’ll only turn gay for Ryan Reynolds.

One thought on “Because My Friends are Enabling Me.”