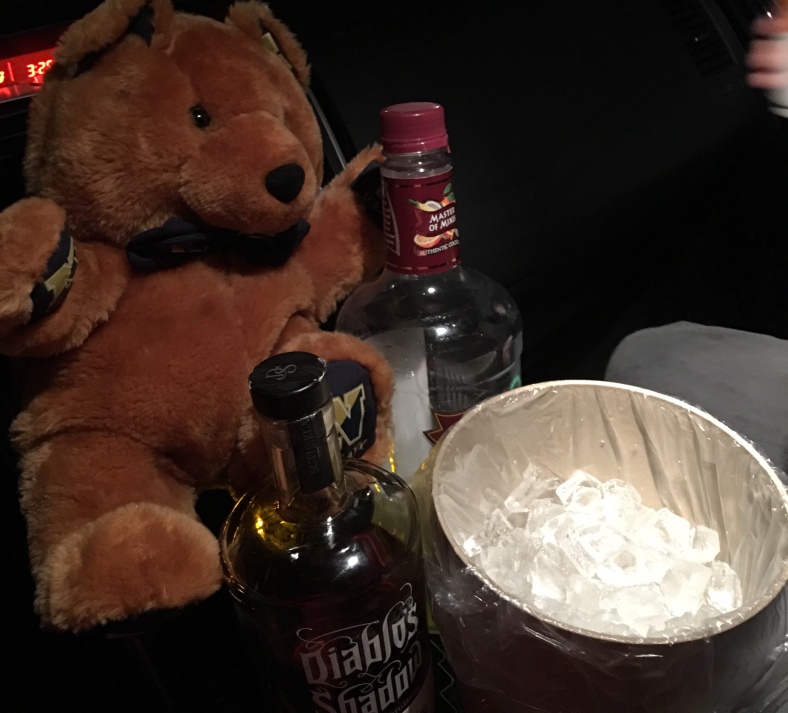 Oh not ME, obviously. My behavior is at all times a model of genteel and ladylike respectability.*

My friend The Sicilian, on the other hand, has been getting up to interstate shenanigans with our mutual friend, The Chemist**, and then texting me about it at 3.30am.

The Sicilian has lived a life filled with family melodrama, crippling health issues, and financial insecurity, and has come out the other end with her sense of humor intact – if a little twisted. Oh also, she used to be married to Satan***. So I think it would be fair to say she has earned the right to a few shenanigans.

Anyway, in the middle of one recent night, after sliding The Kicker back into her crib – stuffed full of milk and temporarily placated – I checked my phone to see what time it was. It was 4am, and I had three missed texts from The Sicilian, who was in Oregon with The Chemist for a family funeral.

People, I’m a mommy. My initial gut reaction to text messages in the middle of the night is panic. Ohgodohgodohgodohgod who’s dead??? …….My fuzzy brain read something about her wearing a coat over her pajamas. Ohgodohgod they’ve been kidnapped by psycho hippy-hillbillies (because Oregon) and have escaped and are running down some back-country dirt road miles from civilization !! Texting me for help!!! Where did The Canadian put the antique rifle???

Around about then my brain woke up enough to remember that since The Sicilian and The Chemist were in Oregon, which is the next state over, they would hardly be texting ME for help escaping the psycho hip-billies, which is totally a word now. That’s a time-sensitive situation and I’m ten hours away, and frankly a little flaky these days about getting back to people.****So I read the REST of the messages and no, no hip-billies, no deserted backwoods roads of certain doom. Just The Sicilian and The Chemist, unable to sleep, and therefore having a little party in the car in the hotel parking lot. Just two middle-aged ladies*****, some booze, some mixers, some ice …….and a bootleg bear.

“In case,” giggled The Sicilian, “I get pulled over like last time!” Oh, you don’t think a text message can giggle? You, my friend, have not met The Sicilian. And apparently their little car-party was so fun they did it again the next night, and texted me again, but at the more decent hour of 10.20ish. Because the next day was Sunday. “For God’s sake,” texted The Sicilian, “we’re not heathens”

Anyway it turns out a bootleg bear is EXACTLY what it sounds like. An innocent looking teddy bear, with a secret zippered compartment for stashing your liquor. I have not personally met this bear yet, but I love him, and he needs to be given a name, and cherished. I do not have a bear that I can hide my booze in, but The Hair found Steven in his room at The Ex’s house, and brought him back to me. Which made me very happy and also made me wonder if I could hollow out Steven’s neck and head cavity, and stash a bottle in there. I mean, I think I could, but it just seems wrong somehow. “Welcome to your new home , Steven. Sorry I left you behind and mostly forgot about you for ages but hey, at least The Ex didn’t throw you in the dumpster so that’s something, right? Now come over here and let mommy scoop out your skull to hide her hooch.”

I shall invite all my respectable friends over to toast his return. They can bring Leonard a bottle in the bootleg bear.

*What’s that sound, you ask? Why, that’s the sound of every single person who knows me, rolling about on the floor and laughing raucously.

**you’ve met The Chemist. She was the one swearing at her phone.

***not literally. I assume. I don’t ask too many questions.

****Despite this, I have assured my older children that they can and should always call me for help, from anywhere, at anytime, no matter what. When The Hair got to a certain age I had this talk with him. “Really Sweetie, no matter WHAT. If you wake up in a hotel room in Amsterdam with your buddy Crispin and a dead hooker and eight pounds of cocaine, call me”*. Whereupon my poor son turned to me with mild alarm and said “What goes ON in your head?!?”

*****The Sicilian looks a good twenty years younger than she is, and perhaps if I hang out with her long enough I will discover her secret. I’m hoping it’s wine. Seems likely.

* If this were to actually happen, it would be Crispin’s fault. No, this is not biased mom-talk. If it were Crispin and The Drama in that situation (which frankly is slightly more likely), it would probably be The Drama’s fault. Regardless, any or all of them should call me.

2 thoughts on “Because This is Not How Respectable Middle-Aged Ladies Behave.”