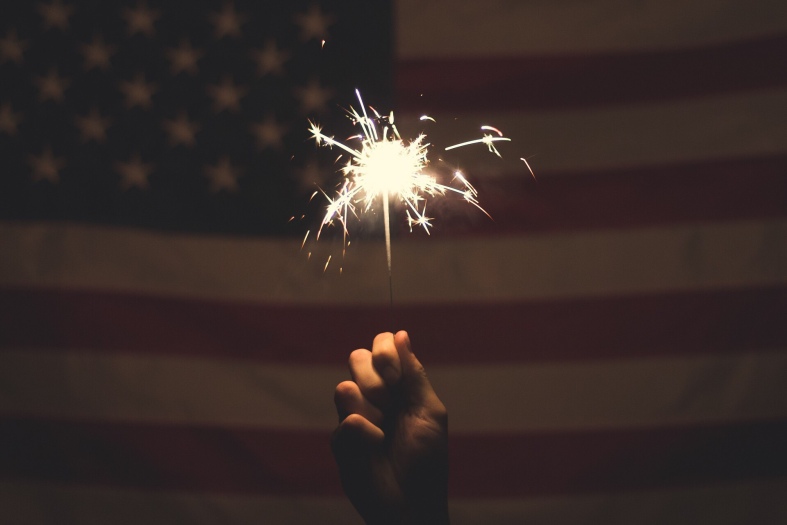 I had a very low-key 4th of July this year, and that’s ok. I feel it’s really in the spirit of Independence Day to just do whatever the hell works for you, and no one can make you go to a parade or have a barbecue or watch fireworks. (Especially not the British, not even the Siri on my phone which I have set to the British male voice and renamed “Nigel”)

Anyway. Most of the older kids were with their other “parents” (Uh-oh…. bitchy alert), except for The Drama who was hanging out here with The Girlfriend (who really is gonna need her own pseudonym soon), and The Canadian was working because it’s an interesting month, financially. So I invited The Chemist over, and we hung out and bitched about stuff chatted, and played with the babies, and most importantly, invented a new 2 ingredient cocktail.

You mix pineapple coconut ice cream with however much rum you feel you need, and voilà! It’s a Whatever-Colada.

I know, I know, it was the 4th. We should have called it something more patriotic like a Freedom-Colada, or a Majestic Eagle-Colada, or a Blowing Yourself Up With Illegal Explosives-Colada, but we are salty middle aged ladies who are practicing to be even saltier old ladies*, plus see above point about freedom, so it’s a Whatever-Colada.

I DO have a confession to make about the ice cream though.

I’ll give you a minute to sit down.

I made it from scratch. In an ice cream maker.

I know, I know, the world is spinning and you feel like you don’t even know me anymore. Just the revelation that I OWN an ice cream maker and know how to use it probably has you questioning the very nature of reality. But the universe is a strange and paradoxical place so just roll with it, K?

Obviously you can and probably should just BUY some pineapple coconut ice cream, but The Chemist brought over a tin of pineapple and I had some coconut cream in the cupboard and The Drama made a comment about Dole Whip and The Chemist can’t eat dairy ** and the planets aligned so we did THIS:

2/3 cup monk fruit sweetener (yes, you could use normal sugar)

Purée in blender until smooth, chill for one hour, pour into ice cream maker and churn for about 25 minutes.

It was delicious. But The Chemist thought it needed a little lime juice so she added a little lime juice and then it was even better. I asked her how much she added, for documenting the recipe, and she was very vague. “Oh, about 2 wedges” she said, which is not much help because how big were the wedges and also, she’s a senior Chemist at an oil refinery so I expected a little more precision and am now slightly nervous about filling up my gas tank.

So she estimated it was about an eighth of a lime, and then she started talking about “noise in the measurement”. At least I think she said “noise in the measurement”. It could have been “gnomes in the mushrooms” or “gnats in the marshmallow” because I had NO idea what she was talking about. I gave up wanting to be a scientist when I was about ten, and discovered it wasn’t all about looking fetching in a crisp white lab coat and designer glasses, while standing behind a table covered with artistically shaped beakers bubbling with various brightly colored liquids………

So THEN she tried to explain it, but it sounded an awful lot like MATH***, which is something I mostly can do, but mostly choose not too. Like calisthenics. The Drama thought it sounded like math too, and his feelings about math can best be understood by imagining Jerry Seinfeld saying “Newman“.

But the point is, I celebrated our national liberty by choosing to NOT do unnecessary math, and TO drink delicious rum beverages.

And I think that’s beautiful.

*the kind that sweetly and bluntly say say exactly what they mean, because they are old and completely out of fucks to give.

**have you ever seen What We Do in the Shadows?? You should. It’s hilarious. Anyway, the scene where the newbie vampire doesn’t realize that he CAN’T eat real food anymore, and idly snacks on a single french fry, and ends up projectile vomiting blood in the alley?? That’s basically The Chemist with dairy.

***and disturbingly like the time, many years ago, when The Ex tried to convince me that “anyone can learn calculus” because “look, it’s just little rectangles”.

3 thoughts on “Because Whoo-hoo, Freedom ‘n Stuff. And Ice-Cream.”