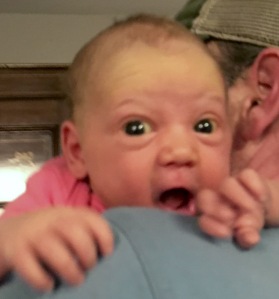 The Kicker has played her first practical joke on her parents, and it’s a classic. We’re very proud of course, that at the ripe old age of one month she has expanded her basic newborn skills set from eating-pooping-crying-sleeping to include pranking mommy and daddy, but we’re a little tired to appreciate it right now.

Here’s how the joke works (and you seasoned veterans of the baby trenches will likely recognize it immediately):  yesterday, Kicker was an ANGEL. Dream baby. She slept like a pro. We got so much done. She even put herself to sleep in her little rocker. She hardly cried, except briefly in the car when she was seriously hungry. She DID fuss a little when we went to dinner, but as long as one of us held her so she could see all the goings on and accept as her due the admiration* of the wait staff and other customers, she was content.  She even slept through the night, which is the Freaking Holy Grail.  In short, the kind of day designed to lull parents into thinking they’ve got this baby raising thing in the bag.

And…..all you seasoned parents are laughing right now, aren’t you?  Oh deary deary me (you’re thinking) did they REALLY fall for that?  With all those kids and decades of parenting experience?  Oh bless their hearts.

Go ahead, patronize us. We deserve it.  Because TODAY…. well. Today was a whole other story.  I could NOT put her down. No matter how carefully I nursed or rocked her to sleep, no matter how comatose she appeared, put her down and ten minutes later she’s awake and crying.

And of course, she would accept no substitutes. To avoid taking her out in the rain, I left her** with The Canadian for less than an hour while I ran The Kitten to and from assorted activities.  I came back to him sitting, grim faced, in the rocking chair, with The Kicker fast asleep in the crook of his elbow.

“She cried” he said, “the whole time you were gone”

“she’s exhausted from all the crying”

I decided not to inquire whose death, he was clearly a man on the edge and ready to jump*** (ha ha, well played, The Kicker).  So I took The Kicker and put her in her bassinet, where (satisfied in her accomplishment of Breaking Daddy) she continued sleeping….. for a whole ten minutes.

Parenthood.  Every day’s a new adventure. Or reason to drink.

*And admired she was, in maximum cute dream baby mode. “Oh how cute!  How old? What’s her name?”…… and our personal favorite, “is she your first?”.   To which we always respond airily (or wearily, depending on how the week is going), “No, this is number seven”.

***He rallied later, dug deep, and got her to stop crying (so I could EAT) by holding her in some kind of modified fireman carry position.  Apparently we’ll need all our tricks with this one.

One thought on “Because it’s the ol’ switcheroo”