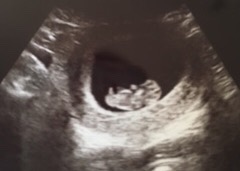 Oh, not about himself. The Drama is very clear on that. He is a boy, and he likes the ladies. The ladies like him too, which is of more concern.  Of greatest concern is that he knows the ladies like him. Leonard will be drinking about all of this for some years yet.

But no, The Drama is confused – or perhaps more accurately in denial – about the gender of The Kicker.  We have two very clear pictures from The Kicker’s 20 week ultrasound; the first one says “I’m a girl!”, and the second says “I’m DEFINITELY a girl”.  The Kicker has six half siblings*, and five of them are boys. When The Kitten heard she was getting a baby sister instead of Yet Another Brother, she fist-bumped the air and shouted “YES!!”

The Drama, however, is less enthused.  Apparently there is no such thing as Too Much Testosterone, or possibly he’s just still emotionally traumatized by being “replaced” (his words) by a girl – The Kitten – when he was three.  Regardless, he keeps referring to The Kicker as “he”, and claims to be utterly convinced that she WILL be a boy.

For good measure he keeps yelling “grow a penis!” at my belly.

I’ve assured him it does NOT work like that, and he really should be clear on it.  After all, I gave him The Talk a few years ago.  The Ex said that he had already done The Talk, but it turned out that consisted of some vague hand gestures and cryptic commentary** which was even less enlightening than the time years before, when I tried to teach The Hair the facts of life using a book published by the Amish***.

So when little The Drama expressed confusion on the subject, I pulled out a Dorling Kindersley book on human anatomy****, and was very, very candid on the subject.  The three glasses of wine I’d had that evening probably helped.

His comment when I finished: “Well, there goes MY childhood”.

So I don’t know, maybe I should have spent more time on fetal development rather than just the mechanics of conception; or maybe he’s been reading some Power of Positive Thinking crap, or somehow gotten into a weird “name it and claim it” cult (oh…I hope not.  Just got out of the LAST cult).  But he insists he will not give up hope until she actually hits puberty and sprouts boobs.

So once she’s here ………I’m inclined to just make him change diapers until he sees and admits his error.